Justice League: Trinity War, is the latest installment from the folks over at WizKids for the Heroclix table top game. After a few delays…it hit the shops February 25, 2015 and was met with the usual excitement of any expansion; all of the players and collectors screaming for someone to “take my money!”

Unlike a more recent set (cough, cough, The Flash), Trinity War does not focus on just one game mechanic. That mechanic of course, was Hypersonic Speed. Trinity War truly has something for every individual playstyle.

This set consists of a total of 73 HeroClix figures, 26 of those have never been seen in this game before! The figure count breaks down like this: 18 common, 17 Uncommon, 17 Rare, 12 Super Rare, 7 Chase, and 1…get ready for it…ULTRA CHASE. More about that later. Now, those of you with Super Math Powers are saying…wait! That only adds up to 72 figures. That is correct, the 73rd figure is the Limited Edition prize from the OP kit. I will not say how long it took me to figure out where that last figure was hiding.   There are also 7 Relics randomly inserted into the boosters as well, corresponding to all 7 Sins. The purchase of a case (20 boosters) came with two additional resource dials to harness the power of those legendary mystic items; Pandora’s Box, and The Rock of Eternity. 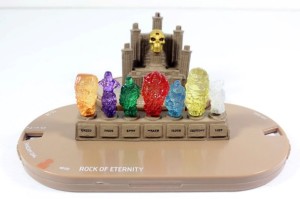 The Rock of Eternity. 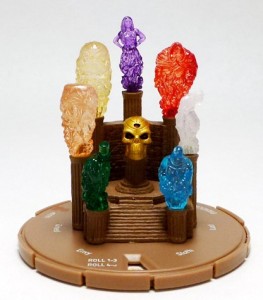 The Rock of Eternity is assigned to only one character or Champion, whereas Pandora’s Box functions more like a traditional resource for your entire team. Both look to be pretty cool, but as of the time I am writing this; I have not actually played either one yet.

I have been reading comics since I was very little, and still do. However, I am surprised at how many active players the HeroClix community has that have never read these amazing stories. This HeroClix release comes directly from the pages of the DC Comics story arc of the same name, back in 2013. The basis of the story is a modern retelling of the Greek legend, Pandora and Seven Deadly Sins. Pandora has a box “she must never open”; of course she does; and releases the Seven Sins upon the world. The twist is that now, we have the likes of Superman, Batman, and Wonder Woman, to beat back those Sinful Entities.

The DC writers were a bit cryptic as to which “Trinity” this war was truly about. The story was spread mainly between three titles, Justice League of America, Justice League, and Justice League Dark. Of course those three teams could not agree on a single course of action, so they tore into one another repeatedly. Keeping that last thought in mind, the characters Pandora, The Question, and The Phantom Stranger, are not only major players in this story line, but are also referred to collectively as, “The Trinity of Sin”. By the end it does become clear what exactly “Trinity” does refer to; but that would be telling…and I am not going to. Go read it!!  Get your Trinity War themed Action Tokens here and here.

Additionally, the Crime Syndicate, from Earth-3 makes its first appearance since the New 52 reboot in Justice League #23; and appear in their entirety in this set! Their arrival takes the Trinity War story right into the Forever Evil story line (another great series).

Ok. Ok. Enough backstory. Let’s get to the Clix. I will paraphrase a bit, so see the cards for exact wording! Come on, you have to do some of the work yourself!

Sculpts and paint on this set were overall very well done. All the classic characters were represented well, sporting their New 52 updates of course. The Parademons are amazing, and Wizkids finally….yes…finally got the tiny size characters correct. Atomica #013 is perfect! I still shake my head every time I pick up Thanos from the Guardians of the Galaxy release. Smaller than Rocket Raccoon? Really? Ok…ok…I am done. 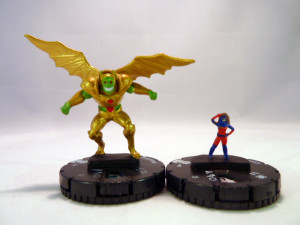 Every new set comes with a tremendous amount of new traits and special abilities for players to exploit, use to defeat our opponents. Trinity War is no exception; here are some that I found interesting. (T=Trait, S=Special Ability)

Signalman- (Trait) Symbols and Signs Control Our Lives: Choose a non-standard combat symbol. All opposing characters with the chosen symbol take a -1 to defense when targeted with mind control, unless Signalman is the attacker, then the target modifies defense -2.

Doctor Light (Prime)- (Trait) Bouncing Around the World at Light Speed: Roll d6, add that result to your printed speed value. Use that as your speed value this turn.

Vibe- (Special) Interrupt Vibrational Anomalies: Opposing characters within range (does not say line of sight) must be given a double power action or move action to use Charge, Hypersonic, Phasing, or Running Shot.

Ocean Master- (Trait) Tidal Wave: Give a double power action, roll 2d6 and double it. Any squares away from the chosen edge of the map equal to the result are now water terrain.  (Pssst, I paired Ocean Master with Yu-Gi-Oh’s Summond Skull.  I rolled an 11. It. Was.  AWESOME.)

Blue Devil- (T) Supernatural Exorcism (or #$@& your Stop Click): When Blue Devil damages a character and a stop click is revealed; after actions resolve, deal that character 2 unavoidable damage. Take that Kyle Rayner!

All Sins- (T) Sinful Influence: All 7 Sins have this trait. You may assign their relic to anyone on your force, by paying the point cost. As long as the character being assigned does not have the Seven Deadly Sins keyword. The object does not count towards your object total. 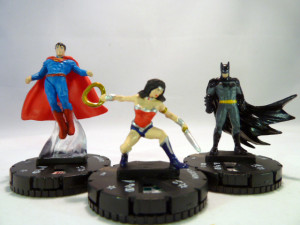 The real trinity of this release has got to be trio of Superman, Batman, and Wonder Woman. Obviously, Superman is the powerhouse, but each one of them is a very solid piece at a reasonable point value. You can play all three at full points, and have a formidable 600 point team. I think this particular incarnation of each, is probably the best thus far on many levels.

I don’t suppose I can write any kind of review without touching on the Chase figures. All seven of the Deadly Sins are represented here. Each of them bring unique, but not overpowered Traits and Special Abilities with them; as well as Qunitessence and the Mystics Team Ability. Their point values are 67-127, so can manage to fit into almost any build. 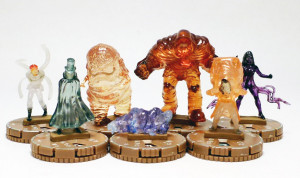 With having one Chase per case, the collector in me can feel the need for something “more rare”. So WizKids gives birth to the Ultra-Chase. Enter the White Rabbit. She looks great. But, I really expected more, BANG! from the first in this class. (More HOP! in this case.) In my estimation, the White Rabbit’s dial is just barely above average; and only that because of her Bio Fusion trait. I was not hoping for some over powered monster of a figure, but I really did expect something better than this. 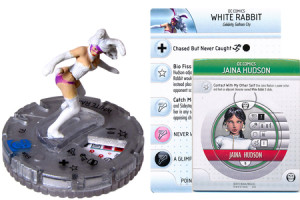 Overall, this is a great release, tons of playable characters, multiple play styles, and new twists on old favorite characters. New to the game, or a long time player; Justice League: Trinity War, is must have.